That’s me, the bad data point … right there.

I generally don’t have much use at all for dating sites or online quizzes, so this is in no way a blanket endorsement … but I do recommend “The 3-Variable Funny Test” as a way to think about humor -in general and your own approach to it.  Go take it and come back, because after the cut are spoilers. 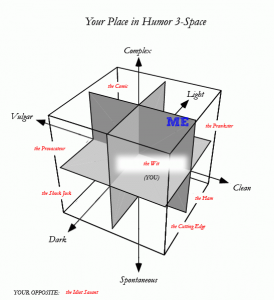 I am the Wit (and sometimes the Prankster)

It’s true – I am totally witty as all hell.  When I drift over to the light side, I’m the Prankster.  But most of the time, I adore screwing around with words and expectations in a way that requires making intellectual leaps and is neither gross nor mean.

I think this is the best kind of humor, but I could be just a little biased. :)

I mean, anybody can repeat potty/body words over and over and get a giggle out of some folks.  It just gets a yawn from me, and most folks who have emotionally graduated from midschool.  There’s a reason that the Idiot Savant and the Shock Jock are my arch-nemeses – “hurr hurr you said boobs” is the laziest form of humor ever.

I might as well say “reticulated splines” until the sounds lose all meaning and are utterly funny-sounding and we giggle ourselves silly putting the emphasis on the wrong syllable.

I sometimes say that I am “too smart to be funny”.  It’s because I adore complexity.  I adore humor that is complicated and layered, like a really good burrito.

It’s the kind of difference between:

Each one builds layers on top of the base joke, which is pretty much “hurr hurr boobs”, until you get something that’s funny but might take five minutes and a diagram to unpack.

Where do you fit in the graph?

Share on Tumblr
This entry was posted in Humor Theory, Products and tagged be who you are, cafepress, humor theory, new product, wit, zazzle. Bookmark the permalink.

6 Responses to Three variables of humor